San Antonio, Texas is among the most crowded cities not just in Texas, but in the entire country as well. It is the second-most populous city in Texas and Southern America and the seventh most populous city in the entire United States. A busy city like this means that it is progressive with lots of businesses from various industries offering products and services to both locals and tourists. Apart from being one of the busiest and fastest-growing cities over the past decade, there are other several important things the proud city of San Antonio is known for throughout the years.

Mark Mancini wrote an interesting article at Smart Shopping enumerating the best things San Antonio is known for throughout the years both locals and tourists would love to know, learn, see and experience in their stay in this lively city. Know these awesome things defining San Antonio below.

Things You Should Know About San Antonio 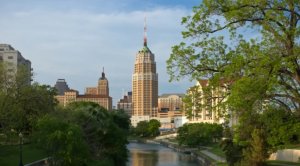 Mark Twain once declared that San Antonio is one of only four truly unique towns in the country (the others being San Francisco, Boston, and New Orleans). Currently America’s seventh-largest city, the metropolis looks poised to climb even higher in the rankings. Historic, diverse, and home to some incredible landmarks, San Antonio’s charms have attracted more than 350,000 new residents since 2004. Read on for 25 facts to file away about the Alamo City.

1. In January 1691, Spain appointed Domingo Terán de los Ríos as the first governor of its Texas province. Later that year, he traveled widely across his new domain. On June 13, the governor made a fateful stop. As it happens, Catholics recognize this date as a holiday—specifically, St. Anthony’s Feast Day. To honor the occasion, Terán named the locale he’d just arrived in “San Antonio.”

2. Worried that France might expand into the territory, Spain convinced a few of its colonial subjects to pack up and begin new lives in Texas. On March 9, 1731, 16 families from the Canary Islands landed in what’s now San Antonio. It’s generally agreed among historians that these were the first Spanish civilians to settle there—though a small military community had been present since 1715.

3. Theatergoers in modern San Antonio can get their fix at the Tobin Center for the Performing Arts. This facility is named after philanthropist Robin Lynn Batts Tobin—who was directly descended from the town’s original Canary Island transplants.

4. Famously, San Antonio is the home of the Alamo, where a key Texas Revolution battle broke out in 1836. Raging on for 13 days, the bloody event claimed at least 521 lives. You probably know that one of the fallen was American legend Davy Crockett. But did you know that there’s a debate about how he died there? San Antonio mayor Franco Ruiz claimed to have spotted Crockett’s body sprawled out on the battleground.

The uniqueness and diversity of San Antonio make it one of the prime tourists’ destinations in the country, adding to the fact that it is one of the busiest and most crowded cities out there. Of course, who would not know the world iconic Alamo and its role towards one of the city’s historic events? The city is also known as the home of the Tobin Center for Performing Arts. So if theater arts is your cup of tea, then San Antonio must be part of your dream destinations. These and more such as Bracken Cave, which is dubbed as the world’s biggest bat colony are among the most interesting facts San Antonio is known for.

These interesting things unique to San Antonio could potentially drive more tourists, especially first-timers to visit San Antonio. Well, apart from visiting The Alamo, there are a lot of things you can do, eat and visit to make your San Antonio vacation memorable. Casey Makovich wrote an article for the first time San Antonio TX visitors, including the top things to do and must-see and do attractions while in the city.

San Antonio features a unique culture; one that is a testament to its historical influences. From its early indigenous inhabitants to the Spanish colonization to its independence from Mexico in the Texan Revolution to the great German migration, San Antonio’s culture is unique in its diversity – and that in itself is something worth exploring.

We put together a list of the top things to do in San Antonio, including museums, theme parks, sampling some of the best food in the US, and more. Here’s what you can’t miss…

Save on admission to top attractions 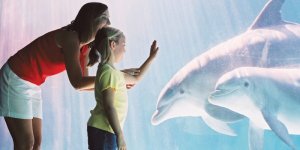 Part aquarium, part thrill-packed theme park, SeaWorld San Antonio lets visitors get closer than ever to tons of marine life, including dolphins, penguins, and polar bears, get splashed by killer whales, and then get an adrenaline rush reaching speeds of up to 50-miles per hour on sea-themed themed thrill rides.

Adrenaline-seekers will want to map their day at SeaWorld around the many thrill rides, like the fast-moving The Great White® ride featuring 360-degree flips and corkscrews, or The Steel Eel’s 15-story vertical drop and camelbacks that give you a feeling of weightlessness.

When the afternoon sun is at its hottest, cool off on the classic splash-drop coaster ride Journey to Atlantis® or the Rio Loco®–just be prepared to get soaked!

Younger ones will want to spend some time at the Sesame Street® Bay of Play®, where they can meet the cast of Sesame Street, take a spin on fun rides like the Shamu Express® mini roller coaster, or sit back and watch an entertaining, family-friendly show. 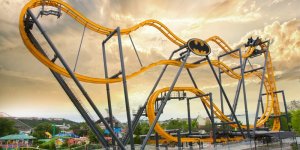 From classic theme park rides like Ferris wheels, bumper cars, water slides, and wave pools, to some of the most cutting-edge thrill ride experiences, like the new 4D Free Fly Coaster BATMAN

: The Ride, Six Flags Fiesta Texas has fun and entertainment for everyone.

The park features seven distinct, themed areas within the park, with lots of rides and varying thrill levels and a water park with slides, rides, and pools.

In addition to all the thrill and water rides, Six Flags Fiesta also has lots of shows and entertainment scheduled throughout the day, plus, several dining and shopping spots. Check the schedule to plan your day around the entertainment you want to see. 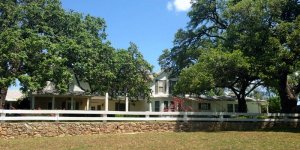 Get the full Texas Hill Country experience on this fully narrated, one-day excursion from San Antonio.

You’ll get a tour of Lyndon B. Johnson’s boyhood home and the LBJ Ranch, also known as the “Texas White House,” and learn all about the legacies of both Lyndon B. Johnson, America’s 36th president, and his wife, Claudia “Lady Bird” Taylor.

Next, you’ll break for lunch and free time in the picturesque and historic town of Fredericksburg, a classic German town where you’ll see the influence of the great German migration of the 1840s and 1850s.

After Fredericksburg, you’ll head to Luckenbach, home of lots of musical legends, including Willie Nelson, Jerry Jeff Walker, Hondo Crouch, and many more.

The last stop on the tour will be to an award-winning winery where you’ll learn about the Texas wine industry first hand (for adults 21+, of course).

What’s make the city of San Antonio unique and popular is because of its unique culture attributed to its historical influences since the Spanish era. Its diverse culture is what makes tourists keep coming back after their first visit to the city. Also, there are a lot of attractions to explore within the city apart from The Alamo, and they are for the family. SeaWorld San Antonio, Six Flag Fiesta Texas, San Antonio Zoo and more are perfect places for a family bonding while on vacation. These attractions are very affordable and very child-friendly, but the most important thing is that these attractions are what San Antonio is known for. 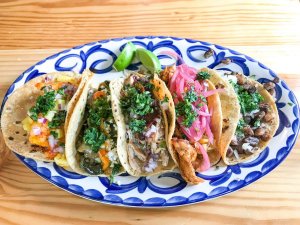 Plastered on trucks all over San Antonio, you’ll see bumper stickers that say, “I wasn’t born in Texas, but I got here as fast as I could!” At one time I wondered, Is that really true? I was just barely a transplant myself, and I didn’t understand the mad rush.

But over the years, I saw the magic unfold. I saw person after person fall in love with the big-city-small-town feel of San Antonio and decide to plant roots — or I saw them leave only to come back as fast as they could. Maybe it’s the affordable living, the mouth-watering tacos, or the iconic River Walk. Once you get here, you’ll understand why people don’t want to leave. And why Mark Twain called San Antonio one of the most unique spots in the country.

On the city’s 300th birthday — 2018 — those reasons will be all the more palpable. Here are 12 truths you’ll only understand once you’ve been to the Alamo City. 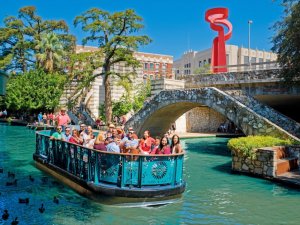 It’s a must-do on everyone’s list. You need to see it to know why. Walking paths, stone bridges, lush landscapes, historic lore, open-air theaters, food, shopping — and the baddest display of Christmas lights this side of the Mississippi.

You can also bet the River Walk will be at the center of the celebration going down during San Antonio’s 300th. Commemorative Week is May 1-6, but the festivities kick off on New Year’s and 2018 is going to be all about events. Get to the River Walk, and you’re bound to run into some kind of fair, art show, or limited-edition 300th brew somewhere along the way.

2. There’s no such thing as too much history.

In 2015, San Antonio’s missions, which include the Alamo, got their UNESCO designation, making us the only city in Texas with World Heritage bragging rights. And while the Spanish history here is intriguing enough, we can’t forget the indigenous influence these missions represent. San Antonio has a story that travels beyond its 1718 founding, back to a time when the Payaya and neighboring tribes ruled the land. Through agricultural know-how and labor, the native people of San Antonio helped the missionaries settle and build our beloved missions — complete with gorgeous Catholic-indigenous designs, Davy Crockett’s hair, and a Mariachi Mass.

3. We bleed silver and black. 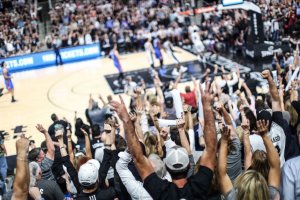 Okay, you might not even like basketball. Believe me, I didn’t when I first got here 18 years ago. But eventually I found myself clothed in silver and black, reeling from every loss, honking my horn in the middle of the night to celebrate (another) NBA championship.

To say we love our Spurs is really a typo. We live our Spurs. You’ll see the fandom plastered on billboards all over the city, in car dealership commercials, and even in our morning cereal. Why? Maybe it’s because the Spurs, like the city, have multicultural roots. Or perhaps it’s because the Spurs have the skills, class, and the heart to win over even the toughest skeptics. Whatever the reason, one thing is clear: San Antonio lives and dies with the Spurs.

4. You can keep your complimentary bread.

Attention, restaurants. In San Antonio, it’s ALL about the chips and salsa. You’ll be judged for it, you’ll be Yelped for it, and there will be great debates about it. You’ve been warned. And visitors: Now you’re in on the secret!

These are the things you’ll only understand when you visit San Antonio for the very reason that you’ll only experience them in the city. They also contribute as to what San Antonio is known for to the outside world. Apart from the fun factor of experiencing these attractions, understanding the city, its people, history and culture of San Antonio could be the most priceless thing you can get visiting the city. This will also allow you to appreciate and love San Antonio even more that will urge you to keep coming back for more, or help you decide to move to the city for good.

After knowing the most significant things San Antonio is known for and decided to move in to the city for good, Dependable Homebuyers can help you find the best home deals in San Antonio TX area. To get started, check us out at https://www.dependablehomebuyers.com and we look forward to hearing from you.